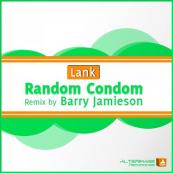 Between a slew of international gigs Lank has had a number of monster releases in the past year on labels like microCastle, Outside the Box and Baroque and makes his long awaited return to AIR with "Random Condom".

Random Condom is a techy and bouncy number that floats long with precise percussion and a melodic hook that will keep the dancefloor moving. Peter's production talents come though in every aspect, creating a futuristic sound a previous generation couldn't even dream of.

On remix duties is none other than Barry Jamieson. Barry's past work in the studio has lead to some of the biggest and most classic releases in EDM. Whether working with Sasha on the Involver series or creating the soundscapes for shows like the international CBS hit, CSI, Barry's talent is not easily matched and this shows in his incredible remix. Cutting edge, modern and still familiar, Barry takes Random Condom to another level that can only be described as awesome with fat basslines, moving drums and a perfect play on the original's hook.

This release represents the new sound of techno. Bending the best of the genre with a modern approach and clean sound, AlterImage is pushing the envelop for musical standards.